“Language as the technology of human extension whose powers of division and separation we know so well, may have been the Tower of Babel by which men sought to scale the highest heavens. Today computers hold out the promise of instant translation of any language into any other code or language.”

Using computer-assisted speech recognition to evaluate the pronunciation of a speaker, Ottercall provides its customers with feedback on how to improve their language skills. In this article, Ottercall’s plan to enter a crowded competitive environment will be described. The article first describes the language-learning market and the points of difference between existing solutions. Next, it will outline the various strategies and decisions considered by Ottercall in developing its market entry strategy. Finally, the lessons learned through this process will be shared.

Table 1 shows that hundreds of millions of people speak a second language. For the most part, these language learners rely on traditional, didactic methods where the teacher instructs the pupil face-to-face in a classroom environment. Desktop language learning software, such as Rosetta Stone, automates the role of the teacher to enable the student to effectively learn a language. However, comprehensive desktop solutions tend to cost in the neighbourhood of $500, which is beyond what many consumers can afford. Recently, more affordable options have become available through online language learning applications such as Babbel and Livemocha. 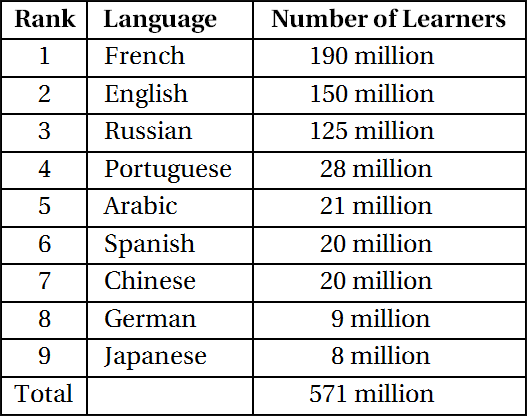 (Source: The World’s 10 most influential Languages)

Figure 2 illustrates Livemocha’s approach. It includes a second shareholder group: instructors that collaborate with learners through an online platform. Instructors create content such as flash cards, grade quizzes, and provide learners with feedback. Largely due to the value added through the involvement of two sides, Livemocha has attracted over 5 million members in over 200 countries since 2007.

To increase the benefits of collaboration, Ottercall will implement the new approach described by Bailetti in the June issue of the OSBR. The new approach is developed further by several authors in this issue. Figure 3 illustrates that Ottercall is designing a multi-sided platform that includes the following stakeholder groups: learners, language schools/instructors, software developers, educational software companies, and researchers. Table 2 provides the value proposition for each stakeholder group. 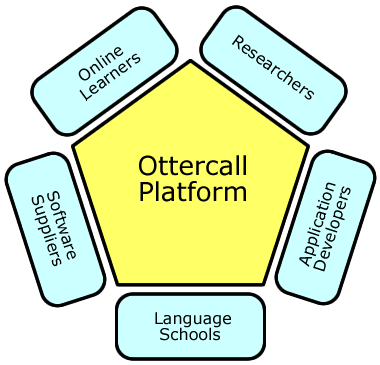 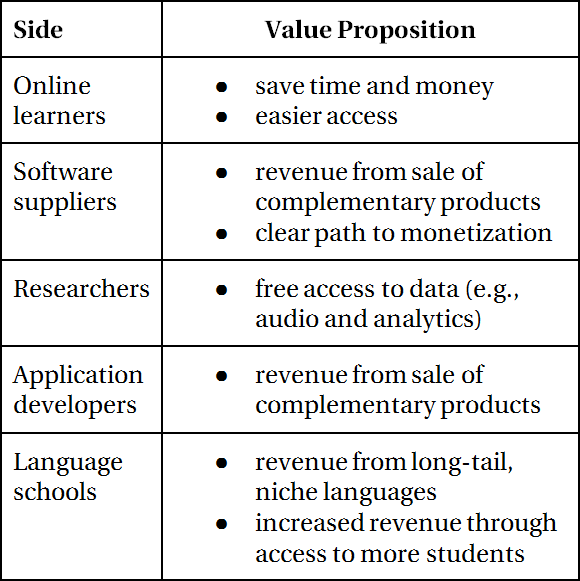 Co-creation is “any act of collective creativity that is experienced jointly by two or more people” (Sanders and Simons, 2009). It is a special case of collaboration where the intent is to create something that is not known in advance (Pedrosa, 2009). Co-creation also can be thought of as a form of customer-driven development, as espoused by Steve Blank.

With the one-sided approach to language learning used by Rosetta Stone and Babbel, there is no co-creation. All the creation is performed by the language software company. They create the product and make it available to customers in exchange for money.

In the case of Livemocha’s two-sided approach, there are elements of co-creation on the learner side and between the learner and instructor sides. Instructors are able to create flash cards to help learners practice. Learners can answer questions from the course content that instructors can then grade. The scored content is available for everyone to view and learn from. Learners can also collaborate with other learners to practice speaking the language using chat and audio features.

A key advantage of Ottercall’s multi-sided approach is that it enables co-creation by allowing members of the different sides to take over specific tasks to contribute value. This will give Ottercall a competitive advantage in the face of well-established incumbents. The benefits include reduced risk, new relationships, new knowledge, and new capabilities.

Without the co-creation element, there would be excessive risk in building the entire system from scratch. A substantial investment of resources would be required to develop the system and despite any amount of research efforts, it would not be clear until the solution was complete whether it would meet the needs of customers and attract sufficient demand to be profitable. Incorporating co-creation throughout the process will motivate users and partners to contribute their time, efforts, and resources. Involving participants will make the product more likely to satisfy their needs because they are the target user and also partners in creation.

Pursuing co-creation will form new relationships between participants in the platform that will tighten their bond and turn them into stronger stakeholders. Building these relationships have been shown to stimulate engagement in co-developing innovations (Pedrosa, 2009). For example, third-party software developers will form relationships with the instructors and learners that use their offering.

Ottercall will need a way to motivate stakeholders to participate. By offering the promise of acquiring new knowledge for participating in the co-creation process, they will be more likely to participate. For example, third-party software developers can engage instructors to gain more domain knowledge in order to create a better product.

Other examples of co-creation that may occur include:

Perhaps the main reason for Ottercall to facilitate co-creation is the belief that through new capabilities, a superior end product will result. Involving other participants in the co-creation process ensures that the product will be built with the right capabilities to solve their problem. For example, enabling instructors to define their own content will allow them to offer the exact functionality to their respective learners.

Companies must not underestimate the importance of trust when building a platform that requires significant investment from participants. Technology news sources are littered with controversial stories about multi-sided platforms, such as Facebook or Apple, in conflict with their partners over trust issues. Executives are understandably hesitant to put the future of their company in the hands of the platform owner if trust is in doubt. Large corporations such as Facebook or Apple encounter trust issues. The challenges are even greater for startups.

The same dimensions of trust need to exist inside the platform between the different participants or else no transactions will occur and Ottercall will fail. In order to establish the ability of participants, a ranking and commenting system will be established where participants can rank each other and leave comments. In essence, these metrics are a demonstration of the level of trust in that particular participant. The ranking and commenting system would also establish the integrity of participants. Trust will be reflected in high rankings; distrust will be reflected in low rankings. Benevolence is more difficult to foster among participants in the platform since they each have their own motivations for participating. By being an open and benevolent company, Ottercall hopes that the same culture is adopted by participants.

Within the overall multi-sided approach, Ottercall is currently making design decisions to define the platform. These decisions impact the sources of revenue, the quantity and quality of co-creation opportunities described earlier, and the degree of control retained by the platform owner. But these decisions are not mutually exclusive; the multi-sided approach allows for multiple revenue-regeneration approaches to be pursued simultaneously with a single platform.

The first decision is to bridge the gap between the existing language learning classroom infrastructure and the shift to teacherless software applications. The platform will allow classrooms to offer web-based solutions to both local and remote students. The instructors would save money by not requiring all students to attend classes and make additional money through access to new remote students via the platform. Students would be able to get easier access to classes and get certifications that would normally require them to attend classes.

The second decision is to address the underserved market for languages that are not being offered by the incumbent language learning companies. Participants will be encouraged to co-create niche language content.

The third decision addresses the bias toward language learners in existing language learning platforms. In other platforms, the language learners tend to be the side that is subsidized, even though they are the side that the revenue comes from. Ottercall would subsidize the instructor’s side, to encourage more instructors to join the platform. In turn, more revenue-generating learners will come to the platform, particularly in search of niche languages. By providing more control to the instructor, they will be more motivated through co-creation to produce more content that can in turn be offered to learners. A clear monetization system that lets instructors set their own prices allows the different sides to co-create content that the entire platform would benefit from.

The fourth decision addresses the lack of an API or “store” that lets third-party developers create applications for the platform. Instructors and learners would benefit from complementary offers from third-party applications, including flash cards, memorization systems, and language games for learners or analytics and grading tools for instructors.

The fifth decision is whether or not to pursue an open source strategy. This maintains the least amount of control of the platform, but could stimulate the growth of the platform through even greater co-creation opportunities. Participants would be able to customize the solution to best fit their needs and commit useful features back into the repository so that everyone can benefit.

Co-creation enables small firms without a definitive concept of what the finished product will look like to setup a means of facilitation to tackle big problems they otherwise could not. Through collaboration with learners, instructors, software developers, researchers, and language learning companies, Ottercall will facilitate the creation of strong products and services that solve real problems and provide value to participants.

Compared to a traditional single-sided approach to language learning, Ottercall’s multi-sided approach holds promise for reducing the risk faced by most start-ups, but by no means guarantees success. By encouraging co-creation and the development of trust between participants, Ottercall will improve its chances of growing revenue in a space where well-established incumbents exist.


Rate This Content:
2 votes have been cast, with an average score of 5 stars

Elias Majic has a Bachelor's degree in software engineering from Carleton University. He worked for several years at software companies before pursuing Ottercall, a language learning startup that uses web-enabled speech recognition. He is a graduate student in the Technology Innovation Management (TIM) program at Carleton University. His research interests are focused on the adoption of speech recognition.

Q&A. How do you motivate potential participants to pay to join a platform?

To motivate participants to pay an affiliation fee, a multi-sided platform must deliver unique value to the various stakeholder groups its sides...

Developing reliable and secure software has become a challenging task, mainly because of the unmanageable complexity of the software systems we build today. Software flaws have many causes, but our observations show that they mostly come from two broad sources: i) design, such as a malicious or unintentional backdoor; and ii) implementation, such as a buffer overflow.

A Money-Making Platform for Entrepreneurs

New technologies such as cloud computing and platforms are beginning to emerge as simple, practical ways for entrepreneurs to start businesses in a short period of time and with little money. They allow businesses to quickly take a concept to the market to see if it will work. If the business takes off, these same technologies are ready to scale the business to reach global markets and to stay...

Communication Enabled Applications: What are the IP Considerations for Platform Providers?

A platform of CEA building blocks, such as the out-of-the-box capabilities of the Coral CEA Sandbox, provides companies with the capability to quickly build new innovative products and services. Key considerations for users of the sandbox include intellectual property, licensing, and any other dependencies inherited from use of the sandbox assets. This article presents some background on this...