A. The need to understand the motivations of cyber-attackers is great, given that "cybersecurity risks pose some of the most serious economic and national security challenges of the 21st Century" (The White House, 2009). However, the motivations behind cyber-attacks intended to cause economic impacts may be different from those posing a threat to national security. And, in many cases, the real purpose and primary objective of a cyber-attack may be hidden or obscured, even if the attacker claims responsibility (Shakarian et al., 2013).

Nonetheless, to help tease out and understand common motivations, cyber-attackers may be categorized, noting that a given attacker may belong to more than one category (Andress & Winterfeld, 2011). For example, politically motivated cyber-attacks may be carried out by members of extremist groups who use cyberspace to spread propaganda, attack websites, and steal money to fund their activities or to plan and coordinate physical-world crime (Gandhi et al., 2011). Generally, the reason for non-politically motivated attacks is generally financial, and most attacks are considered as cyber-crime (Andreasson, 2011), but many cyber-attacks are motivated by deeply-rooted socio-cultural issues (Gandhi et al., 2011).

As shown in Figure 1, cyber-attackers can be broadly considered "insiders" or "outsiders" (Russell & Gangemi, 1993), meaning that they act from within an organization or attempt to penetrate it from the outside. 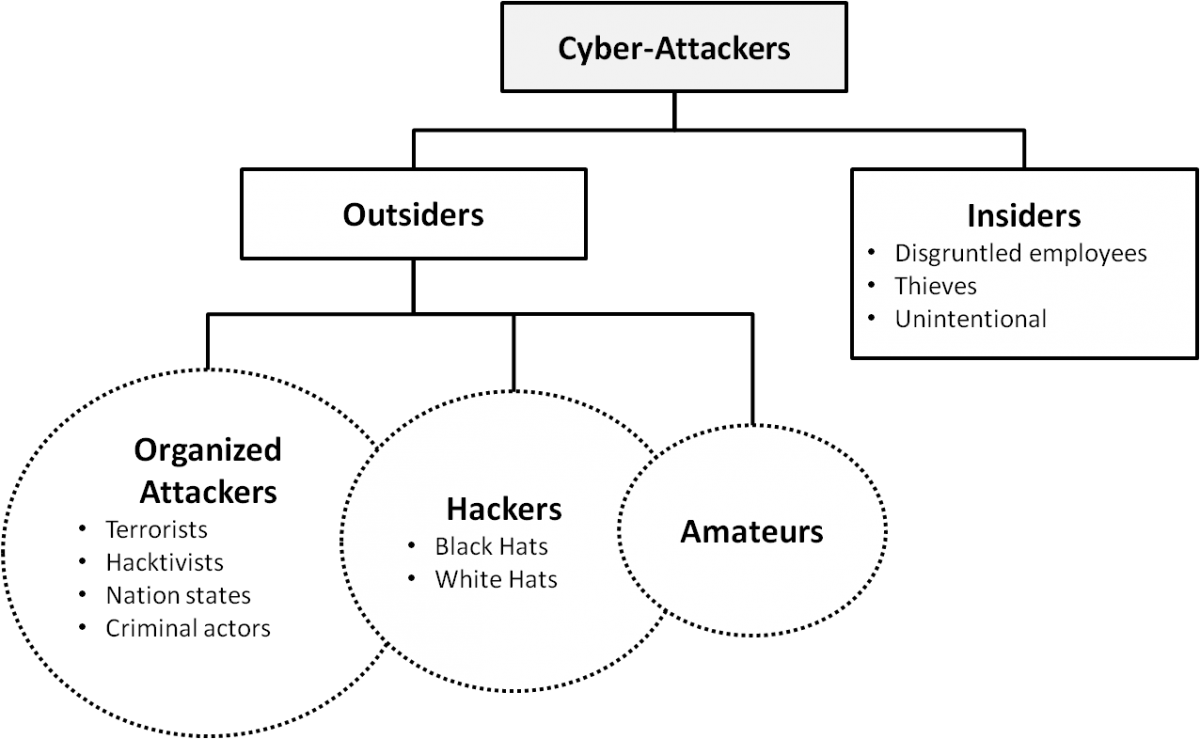 The three basic categories of insiders are: i) disgruntled employees, who may launch retaliatory attacks or threaten the safety of internal systems; ii) financially motivated insiders, who may misuse company assets or manipulate the system for personal gain (although some insiders may be acting on ethical grounds or for other reasons); and unintentional insiders, who may unwittingly facilitate outside attacks, but are not strictly speaking primary attackers (Andress & Winterfeld, 2011).

Outsiders can be classified based on their organization, motives, and professional level: organized attackers, hackers, and amateurs.

Although these categories are presented as discrete groups, there can be some overlap or difficulty placing a given situation into a particular box. For example, a group of hackers can act in a coordinated fashion, and in this sense could be considered "organized attackers."

The categories of cyber-attackers enable us to better understand the attackers' motivations and the actions they take. As shown in Figure 2, operational cybersecurity risks arise from three types of actions: i) inadvertent actions (generally by insiders) that are taken without malicious or harmful intent; ii) deliberate actions (by insiders or outsiders) that are taken intentionally and are meant to do harm; and iii) inaction (generally by insiders), such as a failure to act in a given situation, either because of a lack of appropriate skills, knowledge, guidance, or availability of the correct person to take action (Cebula & Young, 2010). Of primary concern here are deliberate actions, of which there are three categories of motivation (Gandhi et al., 2011):

Figure 2. Types of cyber-attacker actions and their motivations when deliberate

Lewis, J. A. 2002. Assessing the Risks of Cyber Terrorism, Cyber War and Other Cyber Threats. Washington, DC: Center for Strategic and International Studies.


Rate This Content:
12 votes have been cast, with an average score of 3.75 stars

Chen Han is a graduate student in the Technology Innovation Management (TIM) program at Carleton University in Ottawa, Canada. She has more than 8 years working experience in product design, User interface design and project management. She built and led an independent technical team that provides overall solutions and outsourcing services for various clients including world's top media, Internet startups, and multinational firms. Currently, she is working with founder team of Pricebeater, a global startup offering tools for online shopping in North America.

Rituja Dongre is a graduate student in Technology Innovation Management (TIM) program at Carleton University in Ottawa, Canada. She holds a Bachelor's Degree in Electronic and Telecommunication from the Nagpur University, India, and has worked as an Associate Consultant in Capgemini India.

A model for executing and resisting botnet-enabled cyber-attacks and botnet takedowns does not exist. The lack of this representation results in ineffective and inefficient organizational decision making and learning, hampers theory development, and obfuscates the discourse about the “best-case” scenarios for the future of the online world. In this article, a club theory model for botnet-...

Cyber-attacks threaten our ability to use the Internet safely, productively, and creatively worldwide and are at the core of many security concerns. The concept of cyber-attacks, however, remains underdeveloped in the academic literature. To advance theory, design and operate databases to support scholarly research, perform empirical observations, and compare different types of cyber-attacks,...

There has been a rapid growth in the use of communications and information technology, whether embedded in products, used to deliver services, or employed to enable integration and automation of increasingly global supply chains. Increased use of information technology introduces a number of cybersecurity risks affecting cyber-resilience of the supply chain, both in terms of the product or...

The maritime industry has been shown to be under increasing levels of cyber-attack, with future attacks having the potential to severely disrupt critical infrastructure. The industry lacks a standardized approach to cybersecurity, a national approach will be counterproductive, and a global mandatory standard, while needed, will take a long time to implement. In the shorter term, this article...