In many cases, the more you try to compete, the less competitive you actually are.

In many economies, new knowledge and technology creation and transfer towards local entities and new startups have been recognized as catalysts for industry renewal and tools for safeguarding (or even enhancing) a region’s employment and prosperity. This article presents a case study of iMinds, a network organization in Flanders, Belgium. The organization fosters interdisciplinary research in information and communication technologies (ICT) and strongly engages in transferring these new technologies towards local actors and in creating and supporting new startups. iMinds’ incubation and entrepreneurship programs act as catalysts for open innovation and company startup activities in the Flemish region.

Traditionally, Flanders – and by extension Belgium – has been viewed as an interesting location for entering the Western European market. In the 1960s, many large European and American multinationals established production sites and sales and distribution organizations in the region, which brought jobs and welfare. Some of these multinationals were electronics manufacturing companies, such as Alcatel, Siemens and Philips, which increasingly engaged in information and communication technology (ICT) activities. To support these large ICT companies, a large number of suppliers and service providers became established in the region.

The growing group of small and medium-sized enterprises (SMEs) further increased in importance after the divestiture and relocation of corporate activities of the multinational players during the 1990s and early-2000s (similar to what happened in other regions around the world, such as Canada's Capital Region: see Bailetti and Bot [2013] for details). Increasingly, employment, growth, and the preservation of prosperity have been depending on these SMEs, which operate in a small, open economy. The latter characteristic forces them to become born-global ventures, competing on a local and international level.

This changing environment called for action and policy change, which could no longer aim to attract activities from large multinational players. As a reaction to these changes, the Flemish government developed new strategic initiatives for certain domains: in 1984, the Interuniversity Microelectronics Centre (Imec) was established to foster ground-breaking research activities in micro-electronics; in 1991, the government founded the Flemish Institute for Technological Research (VITO) to perform research on cleantech and environmental technologies; and then in 1996, the Flemish Institute for Biotechnology (VIB) was founded.

The latest government initiative of this type was founded in 2004 as an independent research institute: iMinds, formerly known as the Interdisciplinary Institute for Broadband Technology. iMinds was given the task of developing demand-driven solutions (i.e., research, innovation and entrepreneurial ventures) for the ICT sector and fostering the business and societal application and adoption of newly developed technologies, knowledge, products, and services. Creating and maintaining a steady supply of new knowledge and technologies in this fast-moving industry has been recognized as crucial for a healthy ICT sector. Thus, the need for innovation and commercialization has been a driving force behind iMinds’ activities since its inception. This strategy is supported by findings from academic research, such as a study that pointed out that Europe has fewer "young innovative companies" compared to the United States, while this startup group shows the largest potential in terms of contribution to new economic activities in a region (Veugelers, 2009). A clear pillar of activities fostering commercialization and the creation of new technology-based ventures could thus contribute to the business dynamics in a region.

This article describes the iMinds entrepreneurship incubation program as a case study to show how a public research organization can act as a catalyst for open innovation and company startup activities. First, we provide details of the iMinds incubation program. Second, we describe the development and evolution of iMinds' networking function and its emphasis on open collaboration. Finally, we provide conclusions.

iMinds was set up as a focal-point organization designed to link university research to the needs of business and to help build a positive startup and venturing climate. As such, it was designed to be the catalyst for a cluster of innovation (Engel and del Palacio, 2009), a model that had been applied 10 years earlier in the area of biotechnology with the creation of the Flemish Institute of Biotechnology (VIB), which had a similar mission. Over the 20-year period since the VIB was founded, we have witnessed the emergence of a strong biotechnology cluster around this initiative, and the purpose of iMinds is to achieve the same success in ICT. Furthermore, organizations like iMinds form an important part of the "triple helix" model, which creates constructive and mutually reinforcing activities between academia, government, and industry (Etzkowitz, 1998; Leydesdorff, 2000).

The approach that iMinds adopts in transferring knowledge and technologies towards partners and newly created technology-based ventures (spin-offs and startups) is somewhat different from traditional approaches. Although most universities and public research organizations focus solely on monetizing their own intellectual-property assets, iMinds acts as network integrator by fostering interaction and open collaboration (sometimes, but not always, in an open-innovation context) between various actors in the ecosystem. Even though the collaborative and demand-driven research projects form an important part of these activities (roughly 25 out of the 40 million EUR of iMinds' annual budget are spent on collaborative and demand-driven research), they fall outside of the scope of this article. The incubation and entrepreneurship activities target the support of all ICT-driven entrepreneurial and intrapreneurial projects, whether emerging from iMinds research (or iMinds' five Flemish partner universities) or from external entrepreneurs.

In this regard, several tools are used to foster the open support and interactions between various stakeholders:

These iMinds programs, which form only a part of the total iMinds incubation and entrepreneurship toolbox, are open to any entrepreneur with an ICT-related or enabled project that is willing to start their business in the Flemish or Brussels capital region. This approach clearly enables iMinds to foster the creation of a real ICT ecosystem, in which all relevant stakeholders (including universities, large corporations, SMEs, startups, entrepreneurs, students, government organizations, other entrepreneurship-supporting organizations, and non-profit organizations) interact frequently, and spillover effects are generated. The next section will illustrate that the individual programs are relevant as such, but the integrated approach of the incubation and entrepreneurship program at local and regional levels is the real differentiator.

The approach adopted by most technology transfer offices of universities and other public research organizations is to support the commercialization and societal impact of the knowledge and technologies developed in their institutions. The same approach was originally the focus of iMinds’ incubation and entrepreneurship programs. However, as Figure 1 illustrates, the impact remained rather limited in terms of the number of newly created spin-off projects, at least prior to 2011 when the incubation program was started. 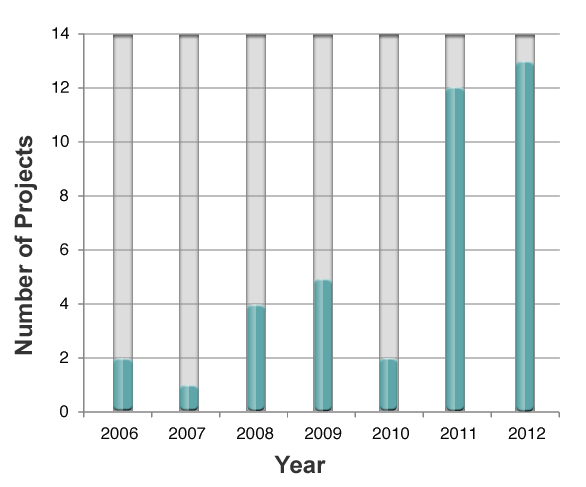 The shift towards a networking function for the incubation and entrepreneurship programs, which already existed at a research level through collaborative and demand-driven research projects, strengthened these programs and created an important amount of spillover effects towards other actors and reinforced the open-cooperation mode with various stakeholders, as described initially by the triple helix model of university–industry–government relations. Some short-term effects are already visible, and some mid- to long-term effects are expected to arise: 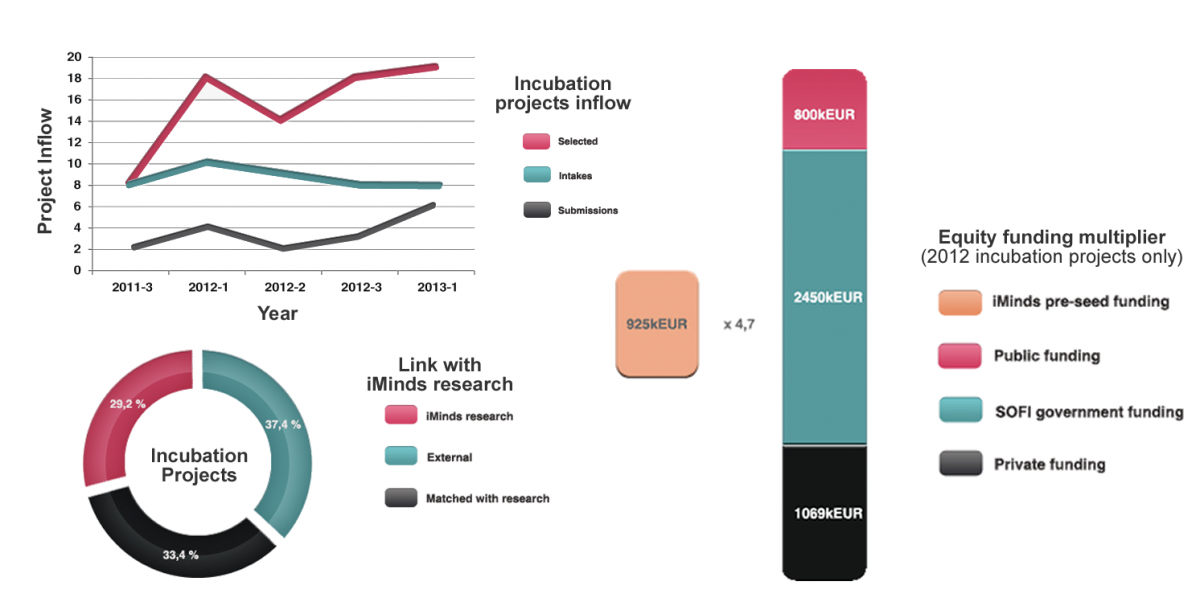 Figure 2. Startup engagement with the iMinds incubation program in terms of project inflow, links with research, and sources of funding

The effect of the open-cooperation mode is not limited to the direct programs through which iMinds support incubation and entrepreneurship activities. An entire ecosystem of experts and partners becomes apparent, and a partner portfolio of now over 900 organizations has developed. Furthermore, links with various business angels, venture capitalists, and other financers have been set up. Policy initiatives have started to develop around these core activities, and a network of professional service providers – to support spin-offs and startups with advice and support for legal matters, intellectual property, branding, and other matters – has emerged in a natural way. These connections illustrate the indirect effects of opening up incubation programs to engage a wider community of people in incubation and entrepreneurship activities around the core research activities.

Recently in this journal, Bailetti and Bot (2013) described a similar program – Lead To Win – that integrates the efforts of various stakeholders in supporting technology entrepreneurship in Canada’s Capital Region, and they identified job creation as one of the most important functions of an incubation program. We share this view and highlight the importance of the 100 jobs that the iMinds incubation program has created in the Flanders region. By connecting various actors and stakeholders that supporting entrepreneurs and technology-based ventures, the iMinds incubation program plays a direct role in supporting entrepreneurship and job creation.

The way iMinds supports present and future entrepreneurs strongly differs from this traditional model. The new model of open cooperation with all relevant stakeholders and embracing external ideas, as well as external entrepreneurs, creates an entire ecosystem of actors amongst which spillover effects are generated. The first direct and indirect benefits for all entities start to appear, in terms of more intensive cooperation and interaction, human and social capital development, spillover effects, and mutual reinforcement. The fuel powering the creation of this ecosystem is the set of tools in the iMinds incubation and entrepreneurship program.


Rate This Content:
1 votes have been cast, with an average score of 5 stars

Sven H. De Cleyn is Incubation Programs Manager at iMinds, a strategic ICT research centre founded by the Flemish government, where he supports new startup and spin-off projects from their pre-seed phase onwards. He received a PhD in Applied Economics at Antwerp University, Belgium, for his research on the early development of academic spin-offs in Europe. He currently also lectures on entrepreneurship at Karel de Grote University College in Antwerp, he coaches students at the Antwerp Management School, and he conducts research on high-tech entrepreneurship and academic spin-offs as a post-doc researcher at the University of Antwerp.

Frank Gielen is Director of Incubation & Entrepreneurship at iMinds. He holds a PhD in Computer Science from the Free University of Brussels, Belgium. He is also Professor at Ghent University, Belgium, where he teaches courses on software and technology entrepreneurship and drives student entrepreneurship through the "Durf Ondernemen" program. He has entrepreneurial experience through different roles in several ventures.

Ondernemen" program. He has entrepreneurial experience through different roles in several ventures.
Jan Coppens obtained his PhD in computer science engineering from the Information Technology Department of Ghent University, Belgium, in 2006. He continued his research in network technology at Alcatel-Lucent Bell Labs, where he managed several research projects. As part of an internal corporate venture effort, Jan founded and led a small team of entrepreneurs to bring innovative home-networking technology under CxO attention and push it along the product roadmap. At the end of 2007, he left Bell Labs to join the Business Technology Office of McKinsey & Company. Currently, Jan is responsible for marketing and business development at the iMinds Incubation & Entrepreneurship program.

Nations built on innovation, entrepreneurship, and production are able to dominate the world economy. However, risk taking has traditionally been discouraged in developing nations. The uncertainty and financial insecurity associated with entrepreneurial activities are the greatest barriers that budding entrepreneurs need to overcome in order to transition into successful entrepreneurs. This...

A Triadic Actor View of Value Co-creation in Business Incubation

In this paper we view an incubator as a service entity that may take different forms. We contribute to the literature by exploring the utility of the service-dominant logic (SDL) paradigm (Vargo &amp; Lusch, 2016) to better understand incubation operations. Value co-creation is a central axiom of SDL, as is engagement with a supporting service ecosystem. Whilst some studies have considered...

Developing a Replicable and Sustainable Model of Business Incubation

The only constant in the world these days seems to be the accelerating rate of change. This article explores, what are in the author's opinion, the driving forces of change; the decline of the TV industrial complex, business model migration, and the emergence of the knowledge economy. The changes in the way we live and work are having a very profound impact on how businesses start and...