Open is the New Closed: How the Mobile Industry uses Open Source to Further Commercial Agendas

"Open source licenses tell only half the story. The governance model, the implicit rules defining transparency and influence into an open source project, is the small print that determines the power dynamics around that project."

Openness is a much-misunderstood word. It represents a kind of good-will moniker to which people attach an impressive variety of definitions: open source code, open standards, open handsets, openness as in transparency, shared roadmaps, open application programming interfaces (APIs), open route to market, and so on. It is a very forgiving term as far as definitions go.

One of the mobile industry's favourite facets of openness is open source code. Since 2007, tens of mobile industry giants and consortia have embraced open source in some form or other: the Symbian Foundation, LiMo Foundation, Google's Android, Nokia's Qt, Apple's WebKit and Nokia+Intel's Meego are the initiatives that have hit the industry front pages. On the surface, these initiatives use open source licenses, but that only tells half the story. Behind the scenes, Google, Apple, Nokia and others use restrictive governance models and control points that effectively detract the very freedoms that open source licensing is meant to bestow. This article discusses the many forms that governance models can take, and how they are used in the mobile industry to tightly control the roadmap and application of open source projects.

What is Open Source?

Open source licensed software carries four basic freedoms that provide the right to access, modify, distribute and contribute to the software. These freedoms have been expanded into ten cardinal points that form the criteria that every open source license must adhere to, and which are defined by the Open Source Initiative.

A handful of different licenses are used in the vast majority of open source projects; namely the GPL, LGPL, APL, EPL, MPL, BSD and MIT. Interestingly, the GPL which is known as a strong copyleft license, is most often used in personal computer and Internet projects, but is rarely used in the mobile industry. Instead, the licenses used most often in mobile software are weak copyleft, such as the EPL, or permissive licenses, such as the APL, due to handset manufacturer concerns for downstream liabilities.

Licenses are Half the Story

What's often missed in open source discussions is how open source licenses tell only half the story. The governance model, the implicit rules defining transparency and influence into an open source project, is the small print that determines the power dynamics around that project.

In practice, mobile open source initiatives use a variety of control points - such as trademarks, private lines, distribution of derivatives, ownership of reviewers, gravity of contributions and contributor agreements - to turn an egalitarian governance model into an authoritarian one. Such control points can detract the very freedoms that open source licenses are meant to bestow, examples of which are shown in Table 1. 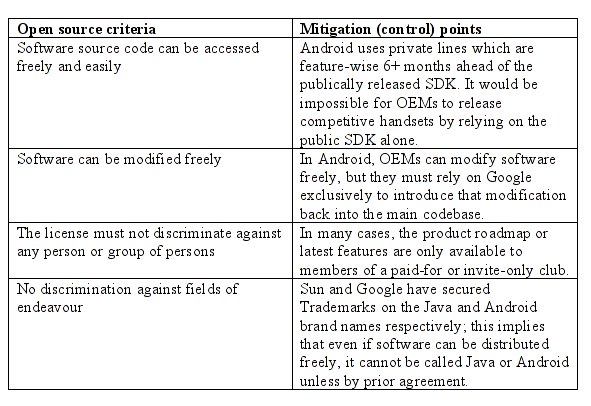 Governance models can be simplified to indicate the democracy of transparency and influence on an open source product. On one end of the spectrum are autonomous trust communities where opinion leaders influence the direction of the product through a chain of trusted reviewers. An example of this type of model is Linux. On the other end are single-sponsor communities where the product roadmap, private lines, contributions and trademarks are controlled by a single company. Based on this simplified governance model, we map the most popular mobile open source projects, as seen in Figure 1. 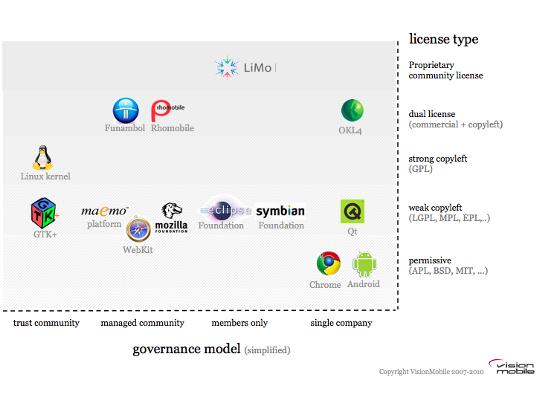 The picture that emerges is one where:

The Maze of Governance Models

There have been many attempts at classifying governance models, but there is really no universal dictionary, no certification body, and an excessive amount of open marketing hype to help obscure rather than enlighten the mobile industry. This is further exacerbated by the fact that governance model particulars are usually available under confidentiality terms. They are rarely critisized and debated in public, in the way, for example, an intrusive privacy policy would be.

How do open source initiatives control access to a product, manage influence mechanisms, or intellectual property (IP) rights for contributions? We have attempted to provide some of the key questions that should be asked when determining the level of openness of a governance model:

We believe that governance models are the key determinant of the ecosystem dynamics, and the level of innovation around open source projects.

A Call for Education

What the mobile industry needs is not more marketing hype around the benefits of openness, but more education and clarity on governance models. The industry also needs a benchmark - a sort of openness index - for determining the true dynamics of an open source product, and for pushing the corporate sponsors to play fair. At VisionMobile we have been quietly working towards developing an openness index and are keen to hear from companies who want to make this happen.

Andreas Constantinou is the Research Director at VisionMobile where he oversees the company's research, advisory and industry mapping projects. He has ten years experience in research, development and strategy in mobile, specialising in the handset ecosystem, software strategy and open source. Andreas has worked on several product and marketing strategy projects for clients including Sony Ericsson, RIM, Microsoft, France Telecom, T-Mobile, OMTP, Qualcomm, ST Ericsson, Gemalto and Trolltech and authored numerous research reports for analyst firms Informa, Ovum and ARCchart. Andreas also teaches the Mobile Open Source workshop, part of VisionMobile's 360 degree training courses on complex industry sectors. Prior to founding VisionMobile, Andreas spent 3 years at Orange's Research and Innovation division, including serving as a technology lead for the Orange-Microsoft relationship. His interests include uncovering under-the-radar industry trends and pursuing human-centric design. When not hopping on planes, Andreas spends his time in Athens, Greece. Andreas holds a Ph.D. in Image and Video Compression from the University of Bristol, UK.

A New Way of Measuring Openness: The Open Governance Index

Sustainability is often thought of as a binary state: an open source project is either sustainable or not. In reality, sustainability is much more complex. What makes this project more sustainable than that one? Why should it be assumed in the first place that sustainability is a prolonged state of an ingraced project? The threads are pulled from their yarns in many directions.

Governance of Open Source Software Foundations: Who Holds the Power?

The research reported in this article attempts to discover who holds the power in open source software foundations through the analysis of governance documents. Artificial neural network analysis is used to analyse the content of the bylaws of six open source foundations (Apache, Eclipse, GNOME, Plone, Python, and SPI) for the purpose of identifying power structures. Results of the research...