Values and Practices behind Collaborative Childcare in Knowledge-based Organizations

New forms of socializing care that leverage community networks and are based on alternative social arrangements are being experimented with in different grassroots contexts. They are being framed as innovative practices to facilitate the integration of professional and caring responsibilities. In this changing landscape, the private sector might benefit from new forms of welfare policies and family-friendly practices that are based on the co-participation of employees, and encouraged by public policies targeting workplace solutions for childcare. This paper intends to contribute to the ongoing debate on socio-technical innovation in management by exploring how collaborative childcare services might be deployed in workplace settings. At the same time, it investigates the role of digital technology in facilitating employees' engagement and participation. 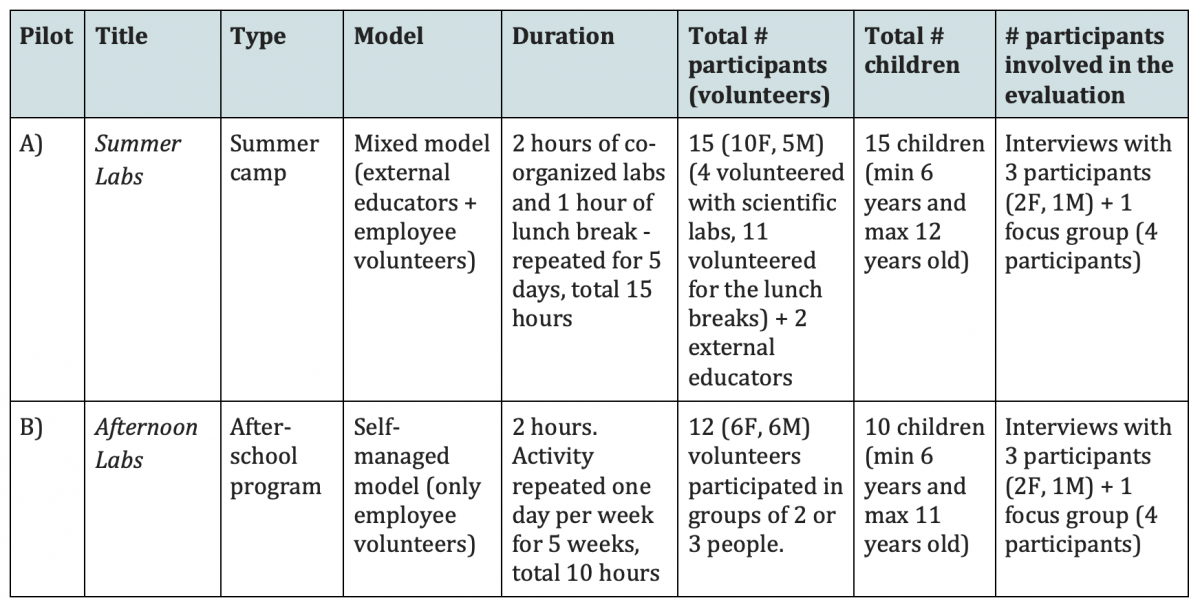 Specifically, the characteristics of the two initiatives are summarized in Table 1 and described as follows:
A. Summer Labs: one-week long educational and recreational activities organized for employees’ children during the summer school break. They were run by external childcare professionals with the involvement of employees. Four employees participated as volunteers proposing educational activities, in some cases based on their professional competencies (for example, educational robotics), and in other cases based on other skills (for example, origami). Another 11 employees were involved in more mundane activities, such as providing support during lunch breaks. Volunteering was not set as mandatory for enrolling kids. The organization provided the physical space and covered the costs for the insurance and the external educators. The employees’ participation and coordination were managed by exploiting a digital platform and encouraged by a community management team.
B. Afternoon Labs: after-school activities hosted in a specific dedicated room at the organization’s premises and during the working hours of Friday afternoon. These activities were entirely organized and coordinated by employee volunteers without the support of external childcare professionals (but with the support of the community management team). Each activity was managed by groups of two or three employees. Ten children registered in the activity and participated in the 4 Afternoon Labs. Participation was considered part of working time and the organization provided the physical space and paid the costs for insurance coverage.


Rate This Content:
15 votes have been cast, with an average score of 3.06 stars

Gianluca Schiavo is a researcher with the Intelligent Interfaces and Interaction (i3) unit, Fondazione Bruno Kessler (FBK), Trento, Italy and an afﬁliate faculty member with the University of Trento in the Department of Psychology and Cognitive Science. His primary research area is Human-Computer Interaction, speciﬁcally Computer-Supported Cooperative Work and Social Computing. His current research focuses on the design, development, and evaluation of intelligent, collaborative, and inclusive technology for social good.

Chiara Leonardi is a researcher with the Intelligent Interfaces and Interaction (i3) unit, Fondazione Bruno Kessler (FBK), Trento, Italy. Her work is at the intersection of Social Sciences and Computing. She leads human-centred studies applying inclusive and participative methods aimed at understanding possible domains for technology use, designing and evaluating digital services. Drawing on sociological qualitative methods, her goal is to understand users' needs, values and practices, envision novel digital solutions, and iteratively evaluate design ideas with users.

Massimo Zancanaro is a full professor of Computer Science at the Department of Psychology and Cognitive Science of the University of Trento and the head of the Intelligent Interfaces and Interaction (i3) unit at Fondazione Bruno Kessler (FBK). His research interests are in the field of Human-Computer Interaction and specifically on the topic of intelligent interfaces for which he is interested in investigating aspects related to design as well as to the study of reasons for use and non-use. He co-edited two books and has authored or co-authored more than a hundred papers in journals, conferences, and peer-reviewed symposia.

Managing Entrepreneurial Employees Who Bring Their Own IT to Work

Why do some employees invest their own time and money to acquire consumer information technology (IT) for use in the workplace as corporate IT? This behaviour occurs even when their firms already possess considerable IT resources. Moreover, IT governance policies typically oppose the use of unsanctioned IT within the firm. IT governance assumes that the only IT assets that are relevant to the...

The Organization of Living Labs: Coordinating Activities for Regional Innovation

This article contributes to the ongoing knowledge from the first decade of operating living labs with a study on the coordination of novel innovation activities in living labs. The article provides an organizational model for living labs to order the activities that eventually will allow the conceptualization of living labs as innovation systems, thus giving user involvement a more central...

This article considers some of the most recent research into women's participation in technology and entrepreneurship and connects it to the literature on social reproduction in order to paint a more complex picture of the social and environmental factors that influence women's career choices. Specifically, it shows how lingering biases concerning women's reproductive functions...

Underground Innovation: How to Encourage Bootlegging Employees to Disclose Their Good Ideas

Employees are increasingly considered as the origin of many corporate entrepreneurial ideas. Research on “bootlegging” posits that individuals often resort to hidden activities to elaborate their initial ideas and bring them to fruition. The origins and causes of bootlegging behaviour are well argued in the literature. Yet, less is known about what drives bootleggers to uncover their hidden...